Unfortunately, from Monday 29th February 2016 until further notice, there will be no science club after school on Mondays.

We looked to see if our crystals had grown, unfortunately they hadn't but Mrs Watkins had grown some of her own over the half term holiday. We used the Easi-scope microscope and took some close ups of the different crystals, the blue crystals were copper sulphate and the clear ones were  potassium aluminium sulphate ( used for pickling foods ) and salt crystals.

Next we learnt about optical illusions- where the eye and the brain play tricks , we think we are seeing things that aren't there. We made our own optical illusion and looked at the colour blind test and other fun illusions.

8.2.16. Week 4. We looked at the results from last week's investigation. The gummy bears and raisins had both got much bigger. The carrot had become bendy. This happened in the salt solution  due to Osmosis, this is the movement from a concentrated solution to a less concentrated solution. Next we made saturated solutions again by stirring salt, sugar, bicarbonate, borax and Epsom salts into water. Then we placed pipe cleaners into the solution and now we have to wait. Year 3 predicted that the pipe cleaners may change colour, the water will soak up into the pipe cleaners and finally they thought the pipe cleaners my become covered in bubbles. We will take a look in a few days to see what is happening. Finally we mixed water and oil, we noticed they didn't mix and formed 2 layers. We added washing up liquid and year 3 predicted that it might form another layer or that the layers would change colour. What happened.... The washing up liquid made the oil and water mix. This is what happens when we wash dishes and  it helps us to clean them, the oil mixes with the washing up liquid and water and so we get our dishes clean. Science is everywhere !

1.2.16 Week 3. This week year 3 made saturated salt solutions by stirring salt into water until there was some left at the bottom. Next we placed carrots, raisins, potato and gummy bears into the saturated solutions and into ordinary water. We left them to see what would happen. Year 3 predicted that the gummy bears would dissolve or change colour and that the vegetables might change shape. Take a look next week for the results. Then we placed raisins in water and year 3 predicted they would sink, they were correct. Next we dropped the raisins into lemonade and they predicted they would float, they were partly correct , they danced ! The gas, CO2, sticks to the raisins and makes them float to the top, then the bubbles burst and the raisins sink, great to watch, take a look at the video. Finally year 3 carefully placed rolled up kitchen roll into 2 separate beakers and then placed the other end into an empty beaker. They predicted that the water would be sucked up, take a look next week to see the results. What a busy week ! 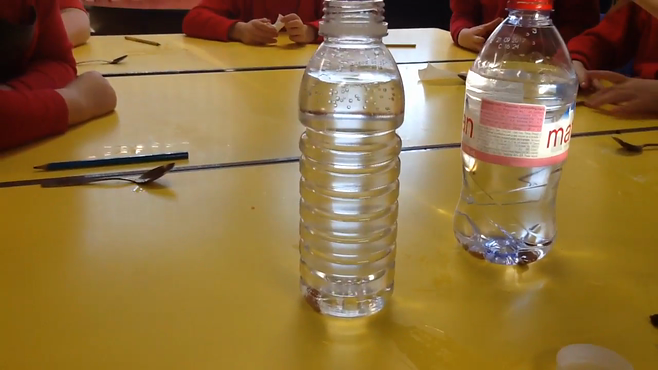 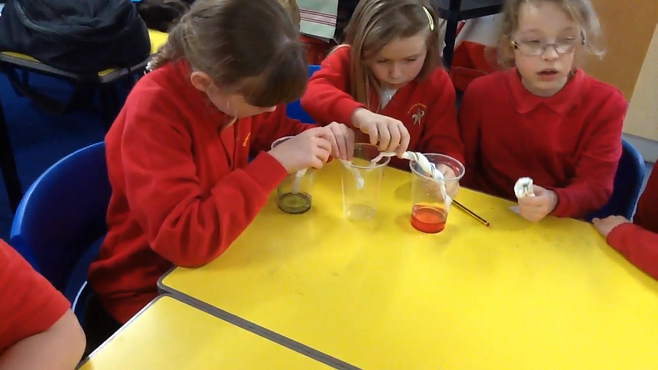 25.1.16 Week 2. Flubber time, year 3 made flubber, great fun ! They mixed glue, water and starch solution to create a polymer which is the stretchy flubber. They went home very happy and eager to try this at home.

We charged up balloons and then had some hair raising fun and also bent water..... Magic, no science. We also separated salt from pepper and picked up tissue with our balloons. When we placed 2 charged balloons close together they pushed away or repeller each other.

Swirling colours, we poured milk into a bowl ,put drops of food colouring at the corners and let it spread out. Then we dipped a lollipop stick into fairy liquid. We predicted that the colours would mix, or move. We were partly correct, the colours moved to the sides.  Then it got messy.... We used shaving foam and paint to create a marble pattern. This happens because shaving foam is made up of long molecules like snakes, one end likes,  attracts, water the other end doesn't. The paint doesn't mix well with the foam but on paper it can spread more easily giving a marble pattern. The pattern is different to the pattern in the foam because of this.

Chromatography wonder. Is black really black ? We drew lines on paper and discussed that they all looked the same...black. Mrs Watkins asked us what we thought would happen if we dipped them in water, we said that the pen might dissolve, it might spread or smudge. We placed them carefully in the water and watched. Slowly the black pen lines separated out into different colours, we looked and compared each other's papers, we could tell which pens were the same. So black isn't black ,it is a mixture of different colours. Take a look at out photos, why not try it at home.

We all had a drink of fizzy pop and discussed why it is fizzy, we said it was the bubbles, the fizz. Mrs Watkins told us it was carbon dioxide, a gas. Then we filled balloons with baking powder, sodium bicarbonate and then we predicted what would happen if we added vinegar. We thought it might explode, fizz up, bubble or perhaps change colour. We added vinegar and watched as it fizzed and bubbled over the top some balloons got bigger too. Then we made a volcano from home made play dough and put a small plastic bottle in the middle , we painted it with red paint to make it look like lava flows. We filled the bottles carefully with more baking powder than we poured in vinegar and WOW it fizzed up into the air and ran down the sides. We discussed what had happened, it was the gas carbon dioxide. Now the science bit ...... An alkali and an acid mixes to produce carbon dioxide. Great fun but messy.

This week we created rainbow water. We pippetted 3 coloured liquids into a test tube and we predicted they would mix, blend or make a different colour..... We were right. Then we stirred different amounts of salt into the 3 different liquids and then we carefully layered the liquids and wow they stayed in their layers. This is because the green liquid had the most salt so was the most dense and the red has less salt and the yellow had the least amount.

Next we made tomatoes float by adding salt to the water, Mrs Watkins said it was like the Dead Sea. Finally we suspended an egg in water it didn't sink to the bottom or float to the top. We predicted that if we stirred the water the egg would float as we mixed up the salt water and again we were right. Great fun with salt and water, take a look at in action.

We tested different household liquids and solids to see if they were acid or alkali. We pippetted red cabbage indicator into our test tubes then added  vinegar, tomato sauce, Haribos, soap, washing up liquids and more. We noticed the purple liquid changed colour. If it went red or pink it was an acid , if it went blue or green it was an alkali. We predicted what bleach might do and we were all right it went yellow , Mrs Watkins was very impressed with us. We found out that tomato sauce and Haribos were acid but the soap and washing detergent was an alkali.

Forensic Science. Take a look at our photos please.

Year 3 looked at their fingerprints using a magnifying glass.

Then we placed our fingerprints on a clean glass and brushed them with flour, this created a latent fingerprint. We placed sellotape over them and peeled the print off and stuck it to paper.

Then it got messy we used an ink pad to place each of our fingerprints from one hand onto the correct boxes. We looked at them with a magnifying glass to see if we could match the different types, arches and swirls. Mrs Watkins thinks we were super forensic scientists in the making.

Try these on line fingerprint games.

23.3.15 Elephant tooth paste, home made fire extinguisher and of course flubber as it is the last session.

We used warm yeast as a catalyst (speeds up reactions) to make foam. The foam was warm due to the heat from the reaction. Watch the video, great fun.

Then we put out a flame using baking soda and vinegar. When they are mixed they make CO2 gas. We collected it in the beeaker above and poured it over the candle which put out the flame. They use CO2 in fire extinguisgers.

Finally we made flubber, a super messy way to end this group's sessions.

A hard boiled egg will not fit through the neck of the bottle. What happems when we burn matches inside though? Our scientists predicted : the egg will melt, the egg will burn, the egg will pop out. But look what happened.

Then we lit the candles. The pupils used the first investigation to correctly predict that the candles would  burn up all the oxygen, but they were surprised by what happened next. Take a look and see.

This week we had fun with water. Year 3 watched water pass from one beaker to another by capillary action. They watched raisins dance and then used a Cartesian diver to try and hook paper clips.

They made some sensible predictions........

'' I think the diver will sink to the bottom because the water makes it sink when you squeeze it.''

Great science predictions, and they didn't get too wet..... well done again !

The pen top has a small amount of air in it. As air is a gas it can be squeezed, compressed, into a smaller space. When we squeeze the bottle it compresses the air in the pen top, this allows more water to fill it up and so it sinks. When we stop squeezing the air expands again and the pen top floats to the top.

This week we learnt about the density of liquids. We made an egg float, we layered oil and water and sprinked salt over it to make a lava lamp. Then we made different sugar solutions and carefully layered them to make a rainbow. The more denser liquids sank to the bottom. The egg floats in salt water because it is less dense than the salty liquid. When you sprinkle salt over the oil layer it sinks to the bottom taking some oil with it. As the salt dissolves the oil floats back up to the top. When it does so it disturbs the drop of food colouring and so this then mixes with the water. Great science fun, an awe and wonderment moment.

Year 3 were highly charged this week. We rubbed balloons to create a charge. We attracted tissue paper and made a stream of water bend slightly. We separated salt from pepper using our charged balloons. Finally we timed how long our balloons would stay on the wall. We all went home with messy hair too- static electricity can be fun.

We used felt pens, kitchen roll and filter paper. We predicted the felt pen would dissolve in the water. But look what happens. The different colours separate out.

Then we made 'glistening'paper using nail varnish and water. The nail varnish makes a thin film on the water and then sticks to the paper when we dipped it in the water.

We made slime by creating a polymer from a solid and a liquid.

We played games to improve our hand eye co-ordination.

Some fun games to play

We looked at our fingerprints to see if they were the same.

We investigated bubble shapes. We used different shaped bubble blowers to see if we could change the shape of our bubbles.  We tried to blow small and large bubbles by blowing in different ways.
Top
Cookie information
Cookie Notice